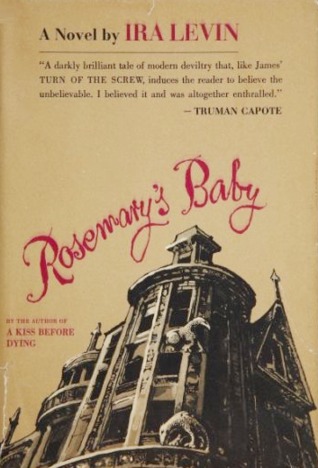 Synopsis (from Goodreads)
Rosemary and Guy Woodhouse, an ordinary young couple, settle into a New York City apartment, unaware that the elderly neighbors and their bizarre group of friends have taken a disturbing interest in them. But by the time Rosemary discovers the horrifying truth, it may be far too late!

My Thoughts
I’ve never read this book and I’ve never seen the movie (at least not that I recall); however, I generally know what happens in the story and how it ends. I think I have heard about this book off and on throughout my entire life. Well, it is October, so what better time of the year to finally read this classic horror novel. Here are my pros and cons for Rosemary’s Baby:

Summary
Ultimately what makes this story scary is the fact that Rosemary has no control over anything that was happening to her. Everyone around her is using her for something and she is either powerless to change it or downright clueless that something nefarious is happening in the first place. The one time she takes back some of her power – at the very end of the book – is probably the one time she shouldn’t.

If this book hadn’t been so boring for me throughout the middle, I probably would have bumped it up a star.

Have you read this book? What did you think?

If you would like to read this book and form your own opinion, please consider purchasing through this link: Buy Rosemary’s Baby. As an Amazon Associate I earn from qualifying purchases at no extra cost to you. Thanks!