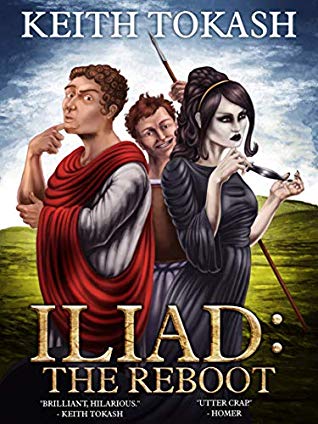 Synopsis (from Goodreads)
History cares about kings, but the gods love a buffoon.

The hapless young soldier Gelios faces execution for offending his king. Desperate, he accidentally volunteers his cousin to chronicle the coming war. Equipped with only a sword and a stunning lack of judgment, Gelios must keep his cousin alive amid the greatest war of an era. Worse, he must survive the egos of the two most powerful kings in their army. But his deadliest struggle is with his mouth. Can he keep it shut long enough to make it home alive?

The Iliad has long been the definitive source of knowledge surrounding the kings, gods, and heroes of the Trojan War. Now, for the first time, readers can experience the clash of two ancient superpowers through the eyes of the biggest jackass in history.

My Thoughts
I really enjoyed this crazy, quirky, and snarky “reboot” of the Iliad. Here are my pros and cons for Iliad: The Reboot:

…embellishment, not lying. It’s dramatic embellishment meant to communicate the values of our culture. -Pelos

Yeah… whatever Pelos. Sounds like fake news to me! Fortunately for the reader, the results are hilarious and eye-opening.

Summary
If you have read the Iliad (the real one) or if you have any knowledge at all of Achilles, Agamemnon, Helen of Troy, and the Trojan War, you will love this insane retelling! The Kindle book is 99 cents as of this posting – go grab a copy and start laughing!

Thank you to the author, Keith Tokash, for providing an electronic copy of this book in exchange for an honest review. I truly enjoyed it and I hope the ending was a hint that Odyssey: The Reboot is coming next!

If you would like to read this book and form your own opinion, please consider purchasing through this link: Buy Iliad: The Reboot. As an Amazon Associate I earn from qualifying purchases at no extra cost to you. Thanks!